Splitting and stacking in the carousel: The development of the S-line

Fecken-Kirfel’s variety of machines contains nowadays more than fifty models which are classified into different lines. Through the years, the individual lines were developped continuously in close collaboration with the customers. In our new series you can read how the machines became even more efficient and more precise with every development stage and more user-friendly at the same time.  Starting with the spltting and stacking machines of the S-line, we’re presenting you the success story of the Fecken-Kirfel machines. In our first episode of the new series of the Fecken-Kirfel machines, we’re presenting the development of the S-line. Since 60 years, the carousel splitting and stacking machines of the S-line cut foam blocks efficiently, economically and fully automatically - also in extreme thin layers.

The S1 (1958): First round splitting machine for light foams

At the model of the S-Line, the cutting unit used to rotate across four static tables, where the foam blocks used to lie. In the next development stage, the four tables were replaced by a circular stationary table.  On this, the cutting unit lowered continuously in a spiral way. The adjustment of the layer thickness was done by replaceable gear-wheels. The helical lowering of the cutting unit and the precise guidance of the bandknife facilitated the complete splitting of the block without taking off the layers.

With the new Splitting and Stacking Machine S1, completely new ground was broken. The continuous cut without the unproductive reverse operation of the material led to an enormous improvement in performance. The new machine made the automatic and uncontrolled splitting and stacking of soft foams into thin layers possible. The first splitting and stacking machine of the S-Line quickly became a success. In 1962, the company applied the machine for a German patent.

S2 (1971): Further development and automation of the carousel splitting and stacking machine

The 13 years younger S2 also used the cutting process without backward operation, but now with reverse movements. Now, the table and the blocks, which were lying on it, rotated. The cutting unit didn’t turn anymore, but only moved vertically. The rotating round table should be maintained for all follow-up models.

Thanks to the direct angular adjustment of the bondstrips, the cut could be much better adapted much better to the individual material. For the first time, teflonized bondstrips were used. Thereby, even sticky foams could be split into thin layers. Even the degree of automation had increased with the development.

Through the years, the foam industry’s requirements increased continuously. On the basis of an intensive research, the consequent realization of cutting experiences as well as in consideration of the customer’s requirements, the proven splitting and stacking machines with the carousel technology were continuously developped. Though, the splitting of foams with high densities was focussed.

In order to assure the maximum of stability during the cutting process, a 60 mm wide knife was used in the S31, as already before in the S1. Due to the drive mounted on the outside, the lifting arm became bigger. Both factors facilitated the splitting of harder and heavier ester foams. The cutting mode was now programmable. 9999 different cutting programs could be created with different layer thicknesses, cutting angles, cutting speeds and the number of cuts as well as the desired input height into the block.

In the new machines S20, S22, S24 and the S32, the bondstrips could be adjusted within an angle of -5 until +5 degree, which minimized the misalignment of the cut layers even further. For the first time, powerful drives made the space-saving positioning of gear rim and gearwheel at the inner diameter possible.

The different offered models of this line only vary in the diameter. So, they correspond to the different customers‘demands. For every application, there is an appropriate machine – depending on the foam quality and the density as well as the capacity requirements.

The S41, which was introduced in 2002, even ensures low tolerances despite the high cutting pressure when cuttting heavy ester foams, thanks to the bondstrips which are tensioned with 110.000 N.  The cutting process is programmable via the PC control. The angular adjustment of -3° until +4° ensures – besides the accurate cuts- that the block nearly doesn’t move anymore.

In order to use full capacity of the advantages of the S41, the bondstrips were reinforced and the geometry of the bondstrips was adjusted in the recent past. The optimized geometry enables a better sliding of the material and reduces the misalignment. In comparison to the old-fashioned way of spraying the lube manually onto the older models, the S41 now has an automatic spraying device of the bondstrips.

Different additional solutions have been developped in order to adapt the machines to the customer’s production conditions. By means of a conveyor system for tangential loading and unloading, it is possible to integrate the machines into a whole cutting line. Additionally, a strong air cushion system helps to position heavy blocks quickly and without any effort by only one person onto the table.

The use of the additional software FK-Opti-Sheet allows material savings of up to 10 % per block. Thus, you can cut the maximum number of sheets out of one block. Today, the control is equipped with a modern user interface which you can use intuitively.

With the S-Line models from Fecken-Kirfel, you can cut very light materials on the one hand and extremely hard foams on the other hand very precisely. The additional options make the machines even more powerful and more efficient. The different table sizes are perfect for smaller as well as for bigger production volumes. Thanks to the high cutting speeds, the machines of the S-Line are very eficient and today indispensable for the upholstery and mattress industry. 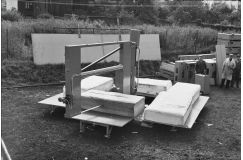 At the first model of the S-line, the cutting unit used to rotate across four static tables, where the foam blocks used to lie. 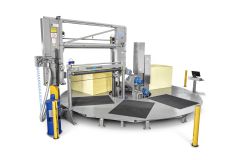 The S41 even ensures low tolerances despite the high cutting pressure when cuttting heavy ester foams. 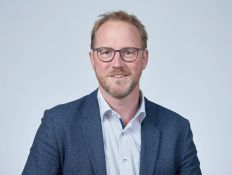