The evolution of the Fecken-Kirfel machines: The C-line

Horizontal contour cutting with the machines of the C-line

Horizontal cutting machines from Fecken-Kirfel have long been making a name for themselves in the industry. Today, our horizontal CNC contour cutters allow users to cut all kinds of contours in a range of materials. The machines are extremely precise and easy to use, and feature intelligent software that enables customised solutions. In the second part of our series on the history of Fecken-Kirfel machines, we look at the development of our contour cutters, from the very first models to our current C5x and C6x: our poster children for fast and efficient horizontal contour cutting.

Until the beginning of the 1970s, contour cutting was extremely hard work. Contour cuts required wooden or cardboard templates that were drawn along a vertical knife. In 1971, Fecken-Kirfel was first to experiment with controlled contour cutting. The C1 was the first contour cutting machine to use sensors and enabled the horizontal cutting of contours with replaceable templates. An optoelectrical position sensor scanned the template. The connection between the position sensor and the cutting system allowed the scanned template to be precisely reproduced at a cutting speed of three metres per minute. The smooth blade and the precise cuts it enabled were a game changer, especially for customers in the upholstery industry. The new process both increased work safety and granted more stability during cutting, especially on long parts. But the C1 was more than just the first milestone in a success story. Fecken-Kirfel’s prototype horizontal contour cutting machine also proved extremely durable and reliable. Some of the machines are still in use today among many of our customers. The new process went on to become the standard in contour cutting – and a highly productive one at that.

A few years later came the C11, a modified version of the first contour cutting machine. The cut pattern was now read by optically scanning the drawings on a horizontal reading table. The reading table and the cutting system were now two separate units. From now on, users could read the contours drawn on paper and transfer them to the machine. This made it possible for the first time to process larger contours like complete mattresses. Another advantage was that the drawings replaced the templates. As well as being easier to create, the drawings also freed up more space by removing the need to store the templates. Also new was a motor-adjusted hold-down device that kept the foam block securely in position. For the C21, Fecken-Kirfel developed its own reading head. The cutting speed also increased from three to five meters per minute.

At the start of the 1980s, Fecken-Kirfel made another important step forward in contour cutting. For the very first time, the contours and cutting lines were created away from the machine using a desktop computer. Design and planning were now performed on a CAD computer. After entering the contour, users could now rotate, move, duplicate and nest the parts inside each other on the screen with the click of a mouse button. Changing the contours was also quick and easy. Once saved, the contour could be opened in the CNC processing station on the cutting machine. Productivity also saw another giant leap, with cutting speed increasing to six metres per second. Computer-aided control was developed further in the years that followed. 1986 saw the C41, the first machine controlled using a CAD PC with DOS operating system. The C42 featured an optional rotary table for A + B cutting programmes, along with automatic loading and unloading tables.

CNC-controlled processing continued to develop at breakneck speed. Just two years after the launch of the C5 series, the DOS operating system was replaced by Windows. Just as noteworthy was the acceleration in cutting speed. The new machine boasted a cutting speed of up to 12 metres per second, double that of its predecessors.

With their user-friendly controls, the contour cutters in the C5 series became best-sellers for all kinds of contour cuts. Another attractive feature was the modified bandknife, which could now be rotated fully by 360° in any direction. Rotating the bandknife around its point also made it possible to precisely cut sharp corners.

Further developments in horizontal contour cutting were achieved in the 6 series. It featured modern software and drive technology, as well as a cutting speed of up to 70 meters per minute, an exponential increase on the initial performance of the first C machine. The cutting results also became increasingly precise as development continued. Right up to this day, this has resulted in maximum productivity and excellent quality. The 6 series of the C-line is fitted with a motor-adjusted central bandknife guide.

Fecken-Kirfel has continued to expand its product range and establish itself in the market. The C68 and C69 both feature oscillating knives. With two synchronised motors and outstanding cutting precision, this method is ideal for cutting technical items and contours with sharp edges, small radii and tight tolerances. After proving successful, Fecken-Kirfel patented the oscillation drive in the same year.

The C58 has been setting new benchmarks in cutting hard materials since 2016. With the abrasive process of the rotating wire, the latest wire cutting system is an intelligent solution for situations in which cutting with a rotating or oscillating bandknife is not possible.

With its ingenuity and decades of experience, Fecken-Kirfel has successfully perfected contour cutting technology. From PU soft foam, latex and composite foam to PE foam and similar materials, the modern CNC contour cutting machines in Fecken-Kirfel’s C5x and C6x series allow users to cut virtually any contour in a variety of materials. As well as mattresses and upholstery, the machines are now used to make car parts, packaging, sound insulation panels and industrial products. With their high cutting speeds and excellent precision, the machines in the C-line therefore offer the perfect mix of productivity and quality.

C1, built in 1971: A revolution in horizontal contour cutting 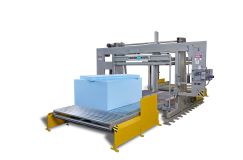 The C67, cutting speed of up to 70 meters per minute - an exponential increase on the initial performance of the first C machine.