The evolution of Fecken-Kirfel machines: Step by step to a fully automated cutting line

In the third part of our series on the history of Fecken-Kirfel machines, we look at how the cutting machines went fully automatic. These days, it’s not just big businesses who benefit from this. Even smaller firms with just two to four connected cutting machines can profit just as much as those using up to 20. The arguments are manifold, from lower building investment costs due to smaller space requirements and material savings from careful material transport to lower wage costs and increased production capacity.

At the end of the 1960s, full-foam mattresses were enjoying a boom in popularity. As demand for the products rose, so did the wage costs for the staff producing them. At the time, industry was looking for a way to automate manufacturing processes, and mattress production was no exception. The answer was to produce PU foam on continuous foaming systems rather than in box foaming. This shift led to changes in the requirements for cutting soft PU foam. In a first step, long blocks had to be turned into shorter ones for the downstream processes. The top, bottom and sides were then trimmed before the long block was shortened. Fecken-Kirfel combined vertical, horizontal and cross cutting machines with transport systems to perform this process.

In the early 1970s, seeking to rationalise work and reduce waste, Fecken-Kirfel developed the first automated cutting line for the production of full-foam mattresses. These incorporated automatic splitting and stacking machines, along with additional vertical cutters. The splitting and stacking machine trimmed the top of the block, cut it into layers and stacked them. The long block was divided lengthways by one or two additional vertical cutters. A cross cutter then cut it to the required length.

This made producing right-angled parts made from soft PU foam much more efficient and greatly increased production output. The first customers to experience this came from Italy and Belgium. Together with Fecken-Kirfel, they took the first steps on the path to automation over 40 years ago. The quality of these machines was so good, both customers are still using parts of their first automated cutting systems today.

Linear cutting lines were perfect for the mass production of right-angled parts. But manufacturing other products only became possible after the development of new processes for cutting foam, such as horizontal and vertical contour cutting. Smaller batches, rising wage costs and increasing product individualisation led to growing cost pressure, making further rationalisation measures necessary. The answer was to incorporate additional processes into automatic processing.

A way had to be found to cut the long blocks into shorter blocks, transport them and automatically load and unload them. Special transport systems were developed for this purpose, along with powerful higher-level control systems and software for managing complex transport processes. The start of the new millennium saw significant development steps that made fully automatic production lines possible. They enabled different cutting processes to occur simultaneously. This required cutting lines to be designed with multiple specific rows.

A milestone: The type T 8 cutting and trimming machine

The type T 8 combined cutting and trimming machine was the first cutting system of this kind, and featured a double-edged bandknife that could be rotated by 90°. The T 8 could perform the functions of two different machine types: the V 116 trimming group and the T 1 cut-off machine. It was now possible to cut short blocks to length, trim them and divide them further if necessary. When this machine was launched, special transport mechanisms with integrated cross conveyors or turntables[sz1]  [sz2] transported the material to the individual cutting line rows.

In 2002, Fecken-Kirfel delivered the first cutting line with T 8 and shuttle to a customer in France. The cutting line was fed with short blocks by means of a rail-based transport mechanism. The first complex cutting line of this kind comprised:

According to the customer, the system paid for itself faster than expected. This was because the clever arrangement and connection of the machines saved material, staff and space costs. The new machine quickly made a name for itself in the market.

As a result, demand for automated cutting lines grew and grew. Fecken-Kirfel kept working on improvements that would benefit customers, with repeated success.

The development of the S-ASR add-on unit (semi-automatic scrap removal) for the T 8, for example, helped further save wage costs. The S-ASR made it possible to automatically remove and transport the trimmed layer on the opposite side to the machine operator. This meant it was no longer necessary to have a second person stand on this side of the machine to remove it manually.

Fecken-Kirfel dedicated itself to incorporating further processes in the cutting lines. One example of this is the combination of:

This combination makes it possible to automatically produce profiled toppers or mattresses from short blocks. The multiple/single-sheet take away conveyor receives individual or multiple layers from the W 22 horizontal splitting machine for further processing. The flip-around can be used to stack profiled sheets so that the profiled side of each faces the same direction (upwards). The final products are then stacked automatically onto pallets using a stacker.

Fecken-Kirfel has been using a material flow controller (MFC) since 2005. This ensures that the short blocks are transported smoothly and automatically to the individual rows of the cutting line. The MFC automatically manages the transport tasks and prevents conflicts between the individual transports. This is also the case when using two shuttles on the same rails.

Connected production in even small businesses

Fecken-Kirfel now delivers cutting lines around the world that incorporate up to 20 machines. Customers can benefit from material and space savings, lower investment and wage costs, and higher output. Today, even smaller businesses can enjoy these benefits, such as those that use two to four connected machines to automatically produce foam parts for upholstery. This was made possible by the W 22/F 62 combination, consisting of:

Even on this “smaller” line, the controls and FK-Order software keep human input to a minimum and ensure a continuous process customised to the respective production.

Optional nesting software uses the order data to generate a nesting across all layers tailored to the contours (2D/3D). Based on the order lists, the program calculates the ideal number of layers and the perfect nesting for the respective loads. This data is then conveyed to FK-Order, which automatically generates the order sequence for the W 22 and F 62 machines. The goal is to make optimum use of the material and keep cutting time to a minimum. Pick-by-View makes it easier for the operator to sort the cut contour parts by displaying the precise layer pattern on a monitor.

Even in small projects, customers can benefit from intensive consultation from Fecken-Kirfel project engineers, from the early planning stages to commissioning and beyond. Fecken-Kirfel always offers tailored solutions based on the current situation, including the incorporation of existing stand-alone machines, multi-functionality, modularity and expandability. Today, Fecken-Kirfel offers state-of-the-art cutting lines ready for Industry 4.0 that let customers take the next step in industrial production. 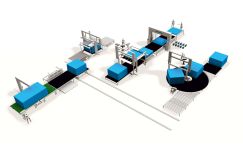