With modern new systems Fecken-Kirfel increases the productivity in production

At the end of April 2018, Fecken-Kirfel will finish the construction of a second new modern centre with robot automation, with the aim of working even more powerful and efficiently in the field of twisting and milling. The first of two systems was already delivered and started up in the late summer of last year. The startup of the second system is imminent. In this way the two new centres will gradually replace one vertical twisting and milling cell as well as two CNC twisting devices.

The new multi-function machine Integrex i-200S of the company Mazak works according to the "DONE-IN-ONE" concept. Up to now, several machines have been required for the various work processes, e.g. a vertical processing centre as well as a CNC twisting centre. This work is now carried out within one single working process by just one machine. The result is not only a higher processing quality and a significantly reduced processing time in production but the machine can also be operated much easier even under better environmental conditions. For the automatic loading and unloading of the CNC machine, a particularly user-friendly and compact robot automation from RoboJob is used. With the robot the productive life of the machine is increased considerably.

The decisive advantage of the new systems is the now realizable automatic complete processing of individual parts. Until now, the parts had to be processed by means of several machines. The new systems can load, completely process and unload the parts in one pass. The automation systems allow automatic loading and unloading from batch size 1 upwards, even "unmanned" e.g. overnight. As a result, new mechanical components to be produced by cutting machines can be produced faster, more precisely and more efficiently. Both systems are carried out redundant and can replace one another if necessary. If a cutting line stands still, e.g. because of maintenance, the other machine easily handles all work orders - efficiently and quickly. 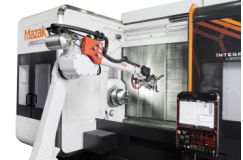 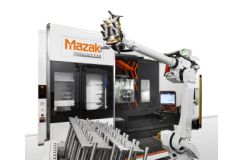