Easy to learn, intuitive to use

On the occasion of the international trade fairs interzum 2019 and K 2019 we have presented our “latest state of the art”- user interfaces with the industrial Windows 10 IoT. Meanwhile, the first Fecken-Kirfel machines with the new user interface have been delivered. This is the right time to check how you as a customer can benefit.
Michael Tillmann, our technical director, answers the most important questions about the new interfaces for operating contour cutting machines based on a CNC control as well as vertical and horizontal cutting machines based on an IPC control.

Which targets were the driving force for the development of the new user interface HMI?

On the one hand there was the technical motivation: the necessary change to Windows 10 IoT for both the IPC and the CNC control. On the other hand we fulfilled our customers‘ wish to have a multi-touch capable screen. Furthermore we wanted to realize a 3D-vizualization for both machines. It was our aim to simplify our machines‘ control and to design it ergonomically.

Are Fecken-Kirfel machines intuitive to operate thanks to the new user-interface HMI?

Easy to learn and intuitive to use – these are the keywords which put the key benefit for our customers in a nutshell. In order to reconcile all requirements we’ve participated at the widespread research project MaxiMMI. The (german) abbreviation stands for „multimodal, task-oriented operating system for flexible and user-oriented human-machine-interaction“. In this research project, it was examined how machine operation should be designed so that it is well suited to safe and productive machine operation in the „heterogeneity of user groups“, i.e. for people of different ages and previous knowledge, different ethnic and linguistic backgrounds, and, taking into account the lowest possible workload, also for employees with reduced performance.

How did you manage to design the user interface HMI in such a way that it meets the users’ different needs and requirements?

First of all we take advantage of the fact that many people already know the gesture control from other electronical devices, e.g. mobile phones or tablets. I place the contours on the screen by drag and drop and drag them into the centered 3D graphics area. The graphic representing the block can be rotated for 360° visualization with finger gesture control and zoomed using multi-touch. How do I place the mattresses in the block? How do I position them to each other? I can see that very clearly, now. Moreover, every operator can create his own user interface in some degree. We even meet the requirements of handicapped people with a debility of sight, color blindness, limited mobility, etc. It is an ergonomic handling by touchscreen, keyboard and mouse.

Do you consider the operator’s particular role for the individual settings?

The role model with a password system allows to allocate individual tasks. This is intimately connected with an assignment of user rights. Access rights and operating options are granted as desired by the customer. In the end, every operator has different requirements than a service assistant or even a production manager, who might be rather interested in production figures, for example.

The uniform user-interface HMI was implemented for machines based on a CNC control and those based on an IPC control. Are the user interfaces identical?

The research project, in which other machine tool manufacturers were also involved, initially resulted in the surface for the CNC machines. After that we have implemented a similar software with a similar surface for the IPC control. The role model is the same. The screen layout, the 3D graphics area and the icons are similar, so that it has a high recognition value.

Does it make sense to upgrade older machines with the new user interfaces?

In general, our machines, thus the mechanics, have a long lifetime. We are talking about at least 20 years, often we maintain machines that are already 30 or 40 years old. The fact that an update is made in the course of time is actually a completely normal process. But for the retrofit, you always have to consider the technical details. Sometimes it is possible to simply install the new control on the existing computer, sometimes you should also replace the control computer.

Those who work with the new user interface benefit from greater efficiency in personnel placement.  Does it offer any further advantages?

Another aspect is the improved nesting performance of CNC machines. The nesting of contours per job takes place at a very detailed level thanks to the new operating concept.  The waste will be reduced to a minimum.  Besides, users benefit from the fact that all digital inputs and outputs can be viewed during trouble shootings. Thus, disturbances can be located easily. This minimizes the downtimes. A connection to nearby machines or higher-level host computer and hierarchy levels is available via the widely used communication protocol OPC-UA. In the end: With the new user-interfaces in mind, our customers experience what characterizes us: We are always available and always near. Thanks to the remote-trouble-shooting respectively our teleservice, we support our customers reliably. You can count on that.

Would you like to know more about our new user-interface HMI? We’re looking forward to your inquiry and we help with words and deeds. 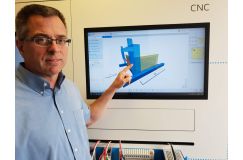